skip to main | skip to sidebar

Last week Batista was at 4.
Posted by Shawn at 6:49 AM No comments:

Khali made a open challenge at Smackdown,he physically attacked everyone in his sight Jimmy Wang Yang and Eugene,Finally. But no one accepted The Great Khali's challenge.But one man has execpted the challenge that is non-other than The Animal Batista.Who stood face to face with the The Great Khali.

The Animal Batista was ready to fight then and there,but The Great Khali's translator pulled Khali away .

The Animal Batista is a man who acceots the challenge with out fear.Batista has faced Edge several times in many matches but never faced Khail in the ring. Khali who is known for destroying his opponent in the ring.

So who is gonna win this match Mail me at sayshawn26@gmail.com with a subject (Batista and Khali)And get your name and answer printed here
Posted by Shawn at 6:43 AM No comments: 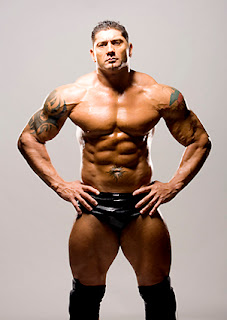 
Dave Batista has been “The Animal” since childhood, in temper if not in name. Raised in a rough part of southeast Washington, D.C., he describes himself as being “a skinny kid with asthma and a bad size complex”— and a penchant for getting into trouble with authorities. He spent a few years in San Francisco after his parents separated, until his mother sent the troubled teen to live with his father in suburban Virginia. By the time he turned 17, he was estranged from both parents, living on his own, and still getting into trouble.

For the better part of 10 years, Batista spent his days training and competing as a bodybuilder, and his nights “bouncing in clubs, floating from here to there.” (He’s still amazed that one club he worked at is less than two blocks from Washington D.C.’s MCI Center, where he defended his World Heavyweight Championship against JBL at SummerSlam in 2005.) His drifting stopped the night he unleashed his explosive temper on two patrons who had attacked his fellow bouncers. “By the time I was finished with them,” he relates, “they were lying on the ground with their eyes rolling in the back of their heads. I was very scared they were going to die.” They didn’t, but the incident did result in Batista’s arrest, a year’s probation, and his decision to make radical changes in his life.

Enrolling in Wild Samoan Afa’s wrestling school in Allentown, Pa., Batista admits that at first he saw sports-entertainment simply as “a way to make a living”— until he was told at a WCW tryout that he didn’t have the chops to make it as a wrestler. “That lit a fire under my a**. Wrestling became an obsession that I fell in love with. I completely redirected my training and philosophies, redesigned my body and mental outlook. I just really wanted to be an athlete and an entertainer.”

Though his personal perseverance brought him to WWE in May 2002, Batista credits former Evolution colleagues Triple H and Ric Flair with developing “a muscleheaded goofball” into a World Heavyweight Champion, one who backs his composed words and demeanor with an explosive fury befitting his nickname. He considers himself neither a leader nor a follower in the locker room (“I’m just a loner, I keep to myself,” he insists), but inside the ring, on the covers of muscle mags like FLEX, and even once against budding Superman Tom Welling on The CW Network series Smallville, “The Animal” is clearly a dominant species. A dominant species who, by the way, has collected more than 50 vintage tin lunchboxes. Our advice: respect this six-foot-six, 290-pound beast and his 1967 Green Hornet sandwich container (sporting Bruce Lee’s face on the front), which he cherishes among his most prized possessions. You’ll live longer.
source- www.wwe.com
Posted by Shawn at 6:17 AM No comments:

Will Batista win against Khali at Bash

The Great America Bash on July 22

Shawn
i am shawn